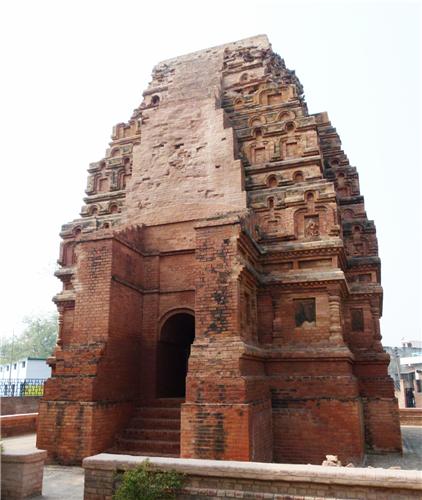 The terracotta panel adds a unique ambience to the 6th century temple which stands as a symbol of religious austerity in the town of Bhitargaon in Kanpur district. The Gupta
Era temple is the oldest surviving terracotta styled Hindu temple. The high Sikhara of the Bhitargaon Temple is another unique aspect of this shrine which attracts large number of visitors on any given day.

Bhitargaon as a village has an interesting history. An ancient city by the name of Pushp-pur existed at the place where the temple presently stands. The inner part of this city was known by the name of Bhitargaon and was separated from the outer region of Barigaon.

The credit for restoring this ancient Hindu Temple goes to King Shiv Pratap who was largely responsible for bringing the temple of Bhitargaon in public preview. Restoration work in the temple was carried out by Alexander Cunningham who visited the temple in 1877 on invitation of King Shiv Pratap. 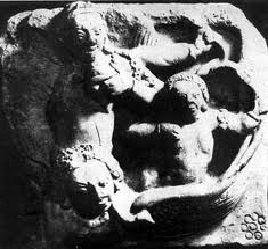 The terracotta panels too were discovered by Alexander Cunningham and he made earnest efforts in restoring them in its present form. Interestingly, the bricks which were discovered in the excavation process were used in restoration of the temple complex.

The temple has been built on a square plan and has double recessed corners. Unique terracotta decorations on the walls of the temple lend it a unique look. Artistically done images of Lord Shiva and Lord Vishnu dot the walls of Bhitargaon Temple thereby adding a distinct touch to the surroundings.

The temple is devoid of windows which speak volumes about the architectural instincts prevalent during the Gupta era when the temple was designed and built. Besides the artistically done imagery of Hindu gods on the walls of Bhitargaon Temple, the same has depictions of stories which represent historic and religiously significant events as abduction of Goddess Sita and the penance done by nara and narayana. The temple also has a vaulted arch which is unique to Indian temples and can only be seen at the historic Bhitargaon Temple. 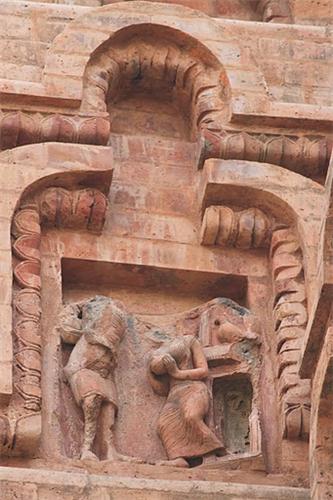 Historians too point out a distinct reason for exclusive use of moulded bricks in the construction of the temple. Gupta Kings had an affinity for brick patterns and a unique reflection of the same can be seen in Bhitargaon Temple. The decorative brick pattern is much similar as is evident in other Gupta era temples including those in Sarnath, Bhitari and Sravasti.

A porch having steps, ardha mandapa, antarala and garbha griha can be seen at Bhitargaon Temple though only in ruins. Only the ardha mandapa has a significant presence but the roof is not evident above the ardha mandapa. After passing through the somewhat broken antarala, the visitors are able to reach the garbha griha.

However, there is some animosity on the height of the Bhitargaon temple among various experts who worked on restoration of this Gupta era temple. While Alexander Cunningham reported the total height of the temple to be 44 feet, the same was reported to be 70 feet by Percy Brown another architect who had worked on the restoration of Bhitargaon Temple.

Bhitargaon is a small village and it would be ideal to commute from Kanpur whenever you desire to visit the temple. Only few tea and snack shops are available in Bhitargaon and you should carry your lunch along when visiting the temple.

Bhitargaon is situated at a distance of 43 km from Kanpur. Local bus service is available from Naubasta bus terminal and shared auto rickshaws too ply from the bus terminal for Bhitargaon Temple.