Uttar Pradesh has been a land of devotion for those who have faith in the almighty God. Be it the Kumbh at Allahabad or the Janmashtami celebrations in Mathura, the state personifies its religious devotion with much fervor.

Like other cities in Uttar Pradesh, in Kanpur too, various festivals are held throughout the year with utmost devotion and fervor. 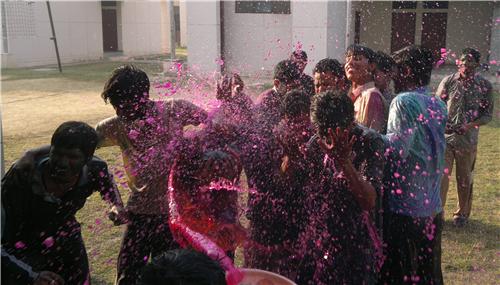 The other morning, people play with colours and mingle with their loved ones, all the while forgiving the bad deeds of self and others. In some parts of Kanpur, the Holi celebrations continue for seven days and the tradition has been in place since the British days. Ganga Mela is celebrated in Kanpur during the Holi festivities and people from all over the region participate in the same with utmost devotion.

Janamashtami, the birthday of Lord Krishna is celebrated with full religious fervour in Kanpur. Temples in the city are specially decked up for the occasion and religious festivities continue well into the night during the festival. The festival is held on two days in Kanpur and on the first day, the festivities continue in the temples. The second day is reserved for celebrations at home and devotees take special care to make the evenings unique.

Tableaux are specially prepared in houses and these display various stages in life of Lord Krishna. Like in the temples, the devotees celebrate the festival with utmost devotion in their homes and Kanpur prepare specially for this important festival.

Diwali is an important festival in India; the same is celebrated with fervour in Kanpur. Special preparations begin in the city, a week ahead of the festival. Special lighting arrangements are made by the district administration and Kanpur city decks up for the festivities.

Goddess Laxmi is worshipped on Diwali and puja celebrations are held at homes in the city. The young and the old alike burn crackers on the occasion to mark the return of Lord Rama to Ayodhaya after killing Ravana after a 14-year-exile.

Shivratri festivities are celebrated with religious fervour in Kanpur. Devotees in large number head to Shiva temples in the city on the occasion to pay their regard to Lord Shiva and seek his blessings. Important temples in the city including Kherepati in Phoolbagh area, Jageshwar in Nawabganj and Pramat in Civil Lines of the city prepare for the festival. Shiv Barat or the marriage ceremony of Lord Shiva is carried out on this day in Kanpur and the same passes through important locations throughout the city. Devotees in large number assemble on roadsides and wait for the Shiv Barat to pass their locality.

Special prasad including Bhang ka Ghota is served to the devotees on this day in temples of Kanpur and the day ends with the devotees heading to their home in the evenings after seeking blessings from Lord Shiva.

Explore more about Culture of Kanpur