Football is getting popular with every passing day and it is only second to cricket in terms of popularity. All India Football Federation (AIFF) promotes and controls the game of football in India. The game of football is controlled in the city by Kanpur District Football Association which is a body of amateur and professional football players from the region.

Football is a popular game in Kanpur and the various football clubs have taken upon themselves the responsibility of inculcating the sportsmanship spirit among the players. 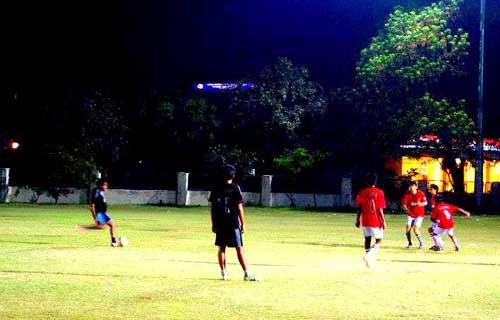 Various football clubs in Kanpur city, be it the Narendra Football Club, IIT Kanpur Football Club or the Cawnpore Sports Club have professionally trained coaches who offer their coaching tips to the budding players. While the key emphasis of the coaching staff in these football clubs is to teach the fundamentals of the game to the players, they also ensure that the spirit of good sportsmanship prevails among the players.

Kanpur being a small city of Uttar Pradesh does not has many professional bodies associated with the game. However, football lovers from the city have taken upon themselves the mission of popularizing the game. These football clubs besides organizing football matches also act as football training centres where professionally trained coaches give basic and advanced level training to those with interest in the game.

Indian Institute of Technology (IIT) also has its own football club which besides participating in important football events in the region also provides opportunities to new players and football enthusiasts to learn the basics of the game. The team is led by an enthusiast captain Jayant Kumar while Mr. Sunil Kumar has taken upon himself the challenge of providing coaching to the talented bunch of players who have been promoting the game in the region.

Cawnpore Sports Club is another premium sports club which provides opportunities to amateur and professional footballers in the region to better their skills. Trained football coaches are available at Cawnpore Sports Club and are always ready to offer their tips to the budding players. Special coaching sessions are held on regular basis at Cawnpore Club where players undergo practice sessions to improve upon their gaming skills.

Seth Anandram Jaipuria has significant sporting infrastructure and a well maintained football field is one of these. It has engaged the services of trained coaches who help the kids learn basics of the game.

Students from Jaipuria have always been part of prestigious football tournaments and has hosted numerous inter school and interstate football tournaments in the past. This creates ample opportunities for those with keen interest in the game and football enthusiasts can always look forward to learning the basics of the game.