Kanpur is a major industrial centre of Uttar Pradesh. The city is popularly known as Leather City of India as it is home to numerous tanneries which produce quality leather products. The city is located on the banks of River Ganges and has an approximate area of 605 square km.

The city is located 126 meters above mean sea level. Kanpur lies in close vicinity of Lucknow, the capital of Uttar Pradesh and is 74 km from Lucknow. Another important city of Uttar Pradesh, Allahabad is situated at a distance of 254 km from Kanpur. 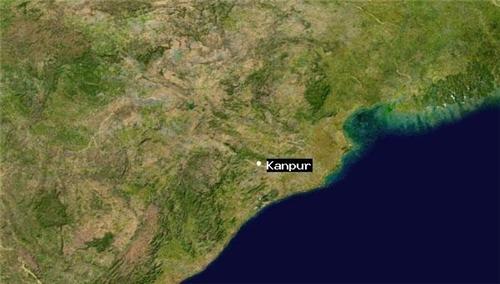 Majority of the population in Kanpur comprises of people who have come over from western and central parts of Uttar Pradesh. This has led to creation of an ambient atmosphere in the city and one can get a glimpse of cultural richness of the state in Kanpur.

Kanpur has a subtropical climate and the same is unlike the typical subtropical climate which one witnesses in other cities having similar climate. While the summer months in Kanpur are hot and dry and longer the city witnesses short and mild winter conditions. Strong dust storms blow during the summer months in Kanpur. Winters are typically cold in the region and severe fog conditions exist, especially during the months of December and January.

However, Kanpur has never witnessed floods at the city is situated on right banks of River Ganges and is situated at a higher bank. The city records an average rainfall of 885 mm.

Kanpur city typically has alluvial and sandy soil. The region typically falls in the Indo-Gangetic plains and major part of the Kanpur district has ordinary soil which is known as Bhur in local language.

Flora and Fauna of Kanpur

You can expect to see numerous migratory birds in Kanpur. These birds frequently inhabit the areas surrounding Bithoor, Ganges Canal and the vicinity of IIT campus. Peacocks and nilgai can be seen in large numbers in these areas of the city.

Allen Forest Zoo located in a natural expanse of the forest is a worthwhile place to visit for any nature enthusiast as the area as rich floral collection on virtue of the region being a natural forest and wide range of faunal species as the Allen Forest Zoo is located in this forested area.

Facts and Figures about Kanpur