A suburb of Kanpur that is situated on the eastern side of the city, on River Ganges is known as Jajmau. It is also known as ‘Jajesmow’ and is an industrial suburb with a population of 652.8 million according to the census of 2011. It is 10 km away from Kanpur city and considered to be one of the best tourist places in Kanpur. This is the most famous excavation site in our country. The Archaeological Survey of India’s research has revealed that this place belongs to a period between 1300-1200 BC. It’s well known for its leather industry. 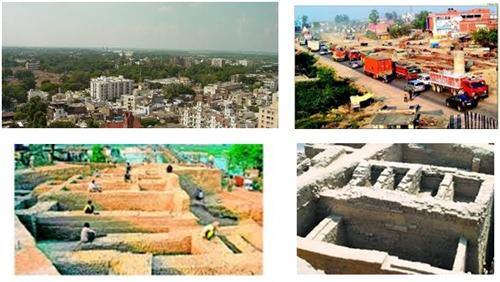 Jajmau is actually a mound that always attracted the historians. During 1957-58 excavations were carried out here. Many items like potteries, utensils, busts and terracota seals were found during these explorations. The archaeologists confirmed that the items dug out belong to the period between 600-1600 AD. The excavations also revealed 3,000 years old residential complexes, potteries and accessories that belong to pre-Mauryan period. The bricks used for these constructions and the dwelling patterns found here confirmed that there was human habitat exsisted in Ganga valley. Archaeologists assured that there were many people who lived here. The lifestyle of the people who lived here is also understood due to this research.

Jajmau is the oldest city and has the biggest leather tanneries which generate a revenue of 1500 crores per annum. On the top of the mound a very old mosque called Jinnaton ki Masjid is seen. It’s white in color and its architecture makes one think of Taj Mahal. The foot hill of the hill has a colony of people who are associated with the leather industry.

Jajmau is also known as Siddhapuri as it has the temples of Siddhnath and Siddha Devi. It is being mentioned several times in ‘Puranas’ and ‘Kands’. This place is believed to be the fort of king ‘Yayati’ who was a famous Hindu king.

It also has a well known tomb of a renowned Sufi saint called Makhdoom Shah Ala-ul-Haq. He was a strong believer of secularism and preached about it throughout his life. As a mark of respect, in the year 1358, Feroze Shah Tughlaq built his tomb. This area is known as Makhdoom Nagar. Later a mosque was also built here by Kulich Khan in 1679 AD.

Jajmau has got a very big market called Lal Bangla. It has got many shops spread over an area of 6 square kilometers. The other shopping areas are Harjinder Nagar, KDA Bazar, Rakesh Complex, Jassi Complex, Grihshobha Complex. Chandari, Shyam nagar, HAL Colony, Kanpur Cantonment, Chakeri, Shuklaganj, Salman Plains and Unnao District are the different areas that are situated in the surroundings of Jajmau. Water from the ‘Defense Colony’s water tank’ is pumped to the city of Jajmau through various pump stations.

Narendra Stadium, Air Force Complex Stadium, Central Park and Joseph Park are located near the city of Jajmau. Some of the tourist attractions located around this place are Jajmau tila, Habiba Masjid, Siddhnath Ghat, 1000 Tanneries in Industrial Estate Jajmau and Mosques.

Jajmau also has many public and private hospitals, eye care centres and clinics which take care of the health of the people here.

Bus routes are available from various areas of Kanpur to reach this place. One can also reach here by autos or four wheelers. Chakeri airport is also situated very close to this place.

It’s very hot in summer and warm in winters. Heavy fog may be experienced during the months of December and January. Rainy season commences in July and continues up to September. At times rainfall is recorded during the months of March and April which is also a harvest season. Hence the best time to visit this place is from October to March.

Explore more about Localities in Kanpur