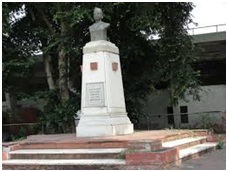 Kanpur is a historical city and was founded by associates of Chandela Dynasty. The name “Kanpur” is derived from Kanhiyapur (which, in Hindi translates to "town of Kanhaiya"). During the British Era the name got transformed to Cawnpore and hence the city got its current name Kanpur. As an important city of the Chandela Dynasty, the city has a number of places of historical importance. The historical ruins of the places help prove the city's existence to the era of pre-13th century.

Nana Rao Park in Kanpur is named after the legendary activist, Nana Rao Peshwa, who fought the first War of Independence in 1857. The history of Nana Rao Park goes back to 1857. To honour Nana Rao Peshwa, who fought like a brave soldier in the war for Independence, the park was named after him. During the Siege of Cawnpore, Nana Sahib had negotiated surrender from the 300 British soldiers and their families in exchange for their safe passage to Allahabad. On the morning of June 27, a large British column led by General Wheeler made their way to the banks of the River Ganga where Nana Sahib had arranged 40 boats for their journey. Since it was the summer time, the Ganga was dry, sluggish and plagued by mud-banks which made navigation difficult. It led to a certain set of historical events, which made the legacy of Nana Sahib, a memorable one.

Talking about the present, the park is a sought after natural getaway among the local people. It is very well constructed and beautifully maintained by the management. The trees, the seasonal flowers and a pretty plant nursery are a treat to watch, and be around, as the scent mesmerizes you very much. A few fountains have also been placed, though randomly, in the park, but they add to its beauty whatsoever.

Nana Rao Park is the most spacious park in the city and has a beautiful collection of flowers and trees. The park, to add to its magnificence, also has flowering plants, fountains and trees. By the side of well is an old banyan tree called “Boodha Bargad” on whose branches freedom fighters were hanged. This Banyan tree is of great historical significance. It was this tree which bore witness to the mass hanging of 144 Indian citizens during the Rebellion of 1857 in India. Though the tree is no more, a stone relic bearing the name and details of the incident is still present.

The park is situated in the center of the city, in the main Civil Lines area. Kanpur Airport is located at about 12 km and Kanpur Central Railway station is at a distance of about 14 km from the stadium. There is ample local transport in the form of auto and cab for the park.

Entry: Since the park is a preserved monument and has relevance to India’s struggle for Independence, no fees is taken for entry. The park is maintained by Kanpur Mahanagar Palika.

Best Time to Visit: The best time to visit is from October to March when the weather is pleasant.